Evidence room audits, across the globe, continues to unearth the instances of missing or tampered evidence resulting in the dismissal of criminal cases. In this era of advancement, maintaining logbooks or spreadsheets to manage large volumes of evidence is no longer justifiable. To cater to this a Digital Evidence Management System is needed, which should allow an Agency to

Currently, VIDIZMO is leading the Digital Evidence Management Industry by providing all of the above and many other features. Here is how law enforcement agencies can streamline their process of digital evidence management using VIDIZMO: 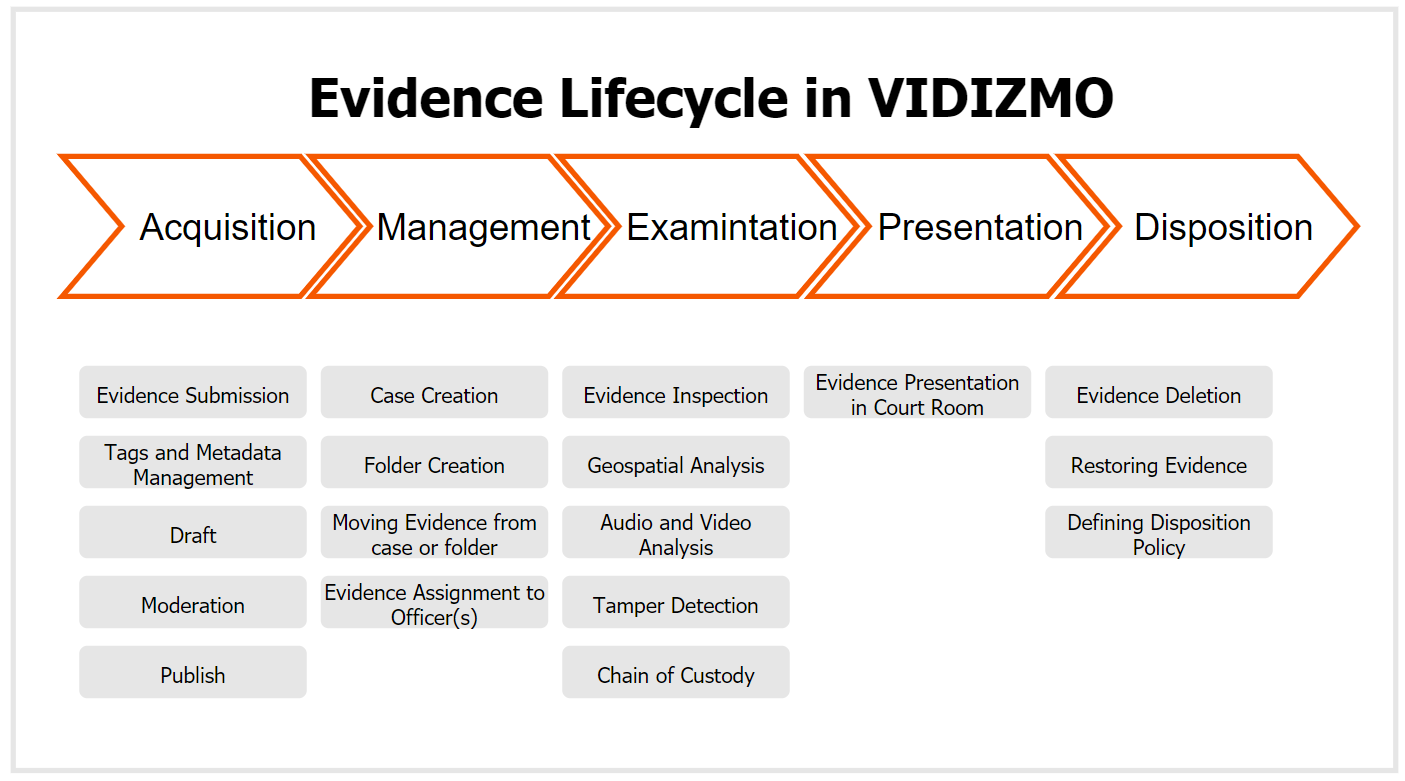 Evidence Submission is the first step of digital forensics, it is the core functionality of Digital Evidence Management Systems. Digital documents, emails, CCTV footages, video recordings, voice recordings are examples of information that can be collected through electronic devices and can be used effectively as evidence in a case. This information is sensitive and can be lost easily if not preserved well. Therefore, it must be stored in a reliable place which not only helps you in managing it but also in retrieving, sharing, and analyzing. VIDIZMO's Digital Evidence Management System caters to all these requirements through its robust Submit Evidence functionality where all sorts of digital evidence can be submitted easily. To learn more about it, read: How to Submit an Evidence

The submitted evidence requires to have title, tags, description, closed caption, drone data, author name so on and so forth as these parameters determine the evidence metadata, its availability, and accessibility. VIDIZMO DEMS allows you to add metadata with evidence so that you can search required evidence efficiently. To learn more about it, read Understanding Media Settings.

In case the authorized user does not want to make the evidence instantly available to users right after submission, VIDIZMO DEMS allows you to save evidence as a draft and publish it later.

If published evidence requires to have some imminent changes, it needs to be hidden from the Portal until those changes are accommodated. VIDIZMO DEMS also allows you to Unpublish the submitted evidence which would be saved as a draft in the Drats Section.

After Evidence Submission, the next step is Evidence Moderation (if configured). Prior to publishing evidence, several aspects are considered, the absence of which may conflict with the authenticity of digital evidence. The shortage of administrative and technical review (by designated officers) could adversely affect the overall acceptance of digital evidence in the court. To ensure the admissibility of evidence, VIDIZMO DEMS provides the Evidence Review functionality which can be enabled/disabled as per the requirements of the department. To learn more about it, read: How to Approve or Reject an Evidence under Review

After completing the submission and moderation cycle, the evidence publishes in the portal. This means the intended users can access, inspect, share the evidence depending upon Portal's Security Policy.

The Police and Law Enforcement Agencies usually create a case at the beginning of investigations, especially when they have some evidence in hand. To cater to this requirement, VIDIZMO DEMS provides case creation functionality that helps police departments to submit evidence within the relevant case(s) and organize these cases within various departmental sections - Folders which assist in maintaining access rights of each case.

VIDIZMO understands the pain to segregate digital evidence with its own distinguishable presence within departments, therefore, VIDIZMO DEMS further provides the ease of creating Folders under which the cases are stored and organized. Using Folders, one can easily navigate to the case and then to the required evidence. To learn more about it, read: How to Manage Folders

The picture below demonstrates the level of segregation provided by VIDIZMO DEMS to store evidence. 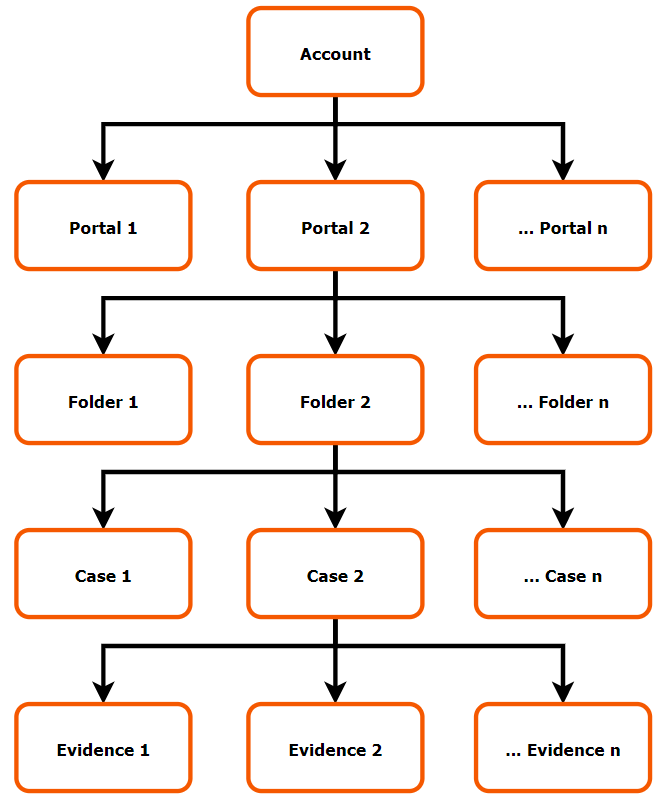 Within law enforcement agencies, it is a common use-case for various investigative officers to be working collaboratively on a single case while functioning in their own respective domain or assignment of the case to a different inspector altogether. One most common cause for the transfer of a case’s responsibility is the process that involves forensics experts to gather data from an incident location but another detective or investigative officer who is held responsible for its resolution. VIDIZMO's DEMS has a view dedicated to Assigned case/evidence where officers can easily access digital evidence and cases shared with them.

Once the Evidence has been submitted the next step could be Evidence Inspection which is perhaps the most useful and needed functionality in DEMS. It is the process of interpreting the evidence to extract objective insights related to the case under question.

Different types of cases and evidence may require different methods of examination. Searching for keywords in videos, annotating specific portions of an image for detailed investigation, sharing evidence with other officers, magnifying, rotating, evidence, frame by frame analysis, etc. are those features that can speed up the entire investigation process. VIDIZMO offers an Evidence Inspection feature in its DEMS, which can make the Police and Law Enforcement Agencies work more efficiently. To learn more about it, read: How to Inspect Evidence

Crime-fighting has now been modernized with the latest technological advancements. Now, drones can be used for surveillance and combat. These drones have sensors embedded in them, which record geospatial data (latitude, longitude, timestamp, temperature, pressure, so and so forth). This information can be crucial in evidence examination.

Keeping in view the importance of geospatial data analysis VIDIZMO offers Analyzing Geospatial Data functionality to its DEMS users. This means, if the submitted video evidence has any Drone Data associated with it, so authorized users can easily analyze it in VIDZMO DEMS. To learn more about it, read: How to Analyze Geospatial Data in Video Evidence

Video analytics can be immensely useful in evidence examination as it provides real-time intelligence to enable immediate response. It enables investigators faster access to any needed video clip from hundreds and thousands of stored video evidence. VIDIZMO DEMS is capable of detecting faces, emotions, transcription from voice, keywords, sentiments so on and so forth. To learn more about video insights, read: Understanding Video Insights

Evidence tampering is a criminal offense. It is an act in which a person alters, falsifies, or conceals evidence with the intent to interfere with an investigation process being monitored by law enforcement, government or regulatory authority. To help avoid Tampering in a case/evidence, VIDIZMO provides Tamper Detection functionality in its DEMS. As any evidence submitted is digitally signed to maintain its integrity and then can be detected for tampers when needed. To learn more about it, read: How to Detect if an Evidence has been Tampered

Evidence after submission, investigation, analysis, admission, and case closing normally dispose-off safely. So, the misuse of any Evidence can be avoided. VIDIZMO’s Digital Evidence Management System has the option of Evidence Disposition. An authorized user can set the disposition period, after which the deleted evidence will automatically be removed from the recycle bin. To learn more about it, read: How to set Disposition Policy of an Evidence

In VIDIZMO Digital Evidence Management System, to record the life of digital evidence from its acquisition and ingestion into the system to its secure disposition, a Chain of Custody report is generated. This is a formal report of security-oriented chronological records that provide documented proof of the trail of activities that have been carried out within your portal or specifically on an evidence or a case.

While analysis of evidence is at the root of a digital forensics process, what comes next is fairly essential in the management of digital evidence and cases. VIDIZMO offers you rich interface capabilities of presenting each evidence in a case in your preferred order. VIDIZMO DEMS holds the capabilities of ingesting various evidence types and processing them into playable formats irrespective of any device, platform, or browser you are using. To learn more about the supported evidence format for submission and presentation click here.

Once a case's verdict has been finalized and all legislative and court hearing activities have concluded, cases and their evidence can be deleted to avoid any misuse of them. This forms a crucial part in the lifecycle of digital evidence and this recurring process of case/evidence deletion is streamlined in VIDIZMO application to allow law enforcement officers to archive and close cases once they have been resolved.

There is a chance that the evidence or case is mistakenly deleted. Hence, for maintaining the integrity of digital evidence, VIDIZMO allows investigative officers to restore the evidence from Recycle Bin within the retention period. To learn more about it, read: How to Restore an Evidence from Disposal

VIDIZMO’s Digital Evidence Management System has the option of setting an Evidence Disposition Policy. An authorized user can set the retention period, after which the deleted evidence will automatically be removed from the recycle bin. To learn more about it read: How to set Disposition Policy of an Evidence