Evidence tampering is a criminal offense. It is an act in which a person alters, falsifies, or conceals evidence with the intent to interfere with an investigation process being monitored by law enforcement, government or regulatory authority. To help detect Evidence integrity, VIDIZMO provides Tamper Detection functionality in its Digital Evidence Management (DEM) system.Content tamper detection works in a way that, when an evidence has been uploaded, its hash stores in the database. Now, whenever an authorized user verifies that evidence a new hash re-generates and compares it to the one which was generated earlier. If both Evidence hashes found to be the exact same then the evidence would mark Un-tampered, and Tampered in the other case. Click to, see: How to Detect if an Evidence has been Tampered.

Content Tamper Detection functionality can be enabled by following the below steps.

1. From the Portal Homepage;

i. Click on the navigation menu on the top left corner. 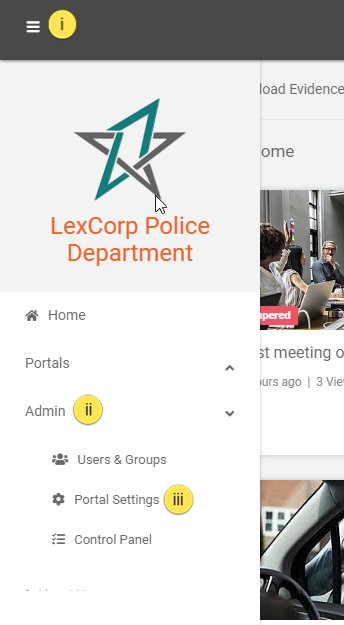 2. From the Portal Settings:

iii. Now, click on the toggle button against the Tamper Verification, to enable Tamper Detection functionality.