ECDN or Enterprise Content Delivery Network is an organisation's globally distributed network of servers deployed for the purpose of faster content delivery by replicating the digital content strategically across all the servers in the ECDN. The digital content is then made available in many places and when a user accesses it, the content from the nearest server is delivered and served to the user.

Without the ECDN, there are high chances of encountering the problems of network congestion and delayed delivery due to sudden and numerous requests from the users when they all try to access content at the same time.

ECDN is used for the scalability of digital content whether it is in the form of a binary file, software update, images, videos or just static content. For example, you are delivering a software update to thousands of geographically dispersed users at the same time. If this is done using a single server, without any ECDN, imagine the resources required by the server, bandwidth consumption challenges faced and the time it will take to complete the task. When using ECDN, the same task can be completed a lot quicker and with lesser resources.

ECDN use servers deployed at different geographical locations where enterprises expect the highest levels of traffic, to serve content. On a high level, the following steps describe the way an ECDN works:

The origin server is the main server deployed for the purpose of serving Live or On-Demand digital content. For scale and resilience, a number of Origin Servers can be deployed, each configured to run as a Live Origin server or for On-Demand content delivery. Click on Using ECDN for Live Streaming over Intranet / WAN section to learn more on the number of ways Live and On-Demand Origin Servers work.

Edge nodes are the interface between the Origin Server and the outside network. These Edge Nodes provide data to caches and are deployed in a hierarchy to allow tiered caching.

VIDIZMO Edge Nodes can be configured to serve on the basis of the user's geographical location, thus making content available from the servers that fall within their proximity. Some of the key benefits to such a deployment include:

VIDIZMO focuses mainly upon the Video technology and comes across many challenges when it comes to handling Streaming Protocols. VIDIZMO ECDN handles these challenges effectively for customers who use RTMP for streaming or those customers who prefer to stream using HTTP.

Here, the network is used to help deliver content from the nearest edge node based on the geographical location from where the content was requested. Using ECDN for delivering Video On-Demand helps substantially reduce latency while streaming, as well as for optimizing bandwidth consumptions by caching data at edge nodes and readily serving as per user demand.

In order to provide an optimum Live Stream experience for a viewer, the Live Stream has to be available as soon as the viewer connects. There may be instances like system failures such as a crash, or communications failures, when the stream may not be able to fulfill this ideal user experience.

VIDIZMO ECDN is intelligently configured to handle such situations by providing failover to the viewer's request using a fallback logic that allows the Edge Node to fallback to other available nodes in the network. This fallback methodology ensures that the stream is always available to the viewer.

Like other networks, the Edge Nodes in the network can be set up under a tiered hierarchy with each Node acting as a fallback appliance to serve the stream in case a live stream is inaccessible. These Edge Node hierarchies are defined on the basis of IP addresses and Subnets, which help identify all those Nodes that exist on the network.

During a Live Stream, the player sends out a request to search and locate the closest Node, since it is the IP which determines which Node is the closest to the player's IP. When the player does not find the Node or experiences connecting problems, it then goes on to search the available stream in next fallback node.

The progression of the player to search an available stream is described with the help of the diagram below: 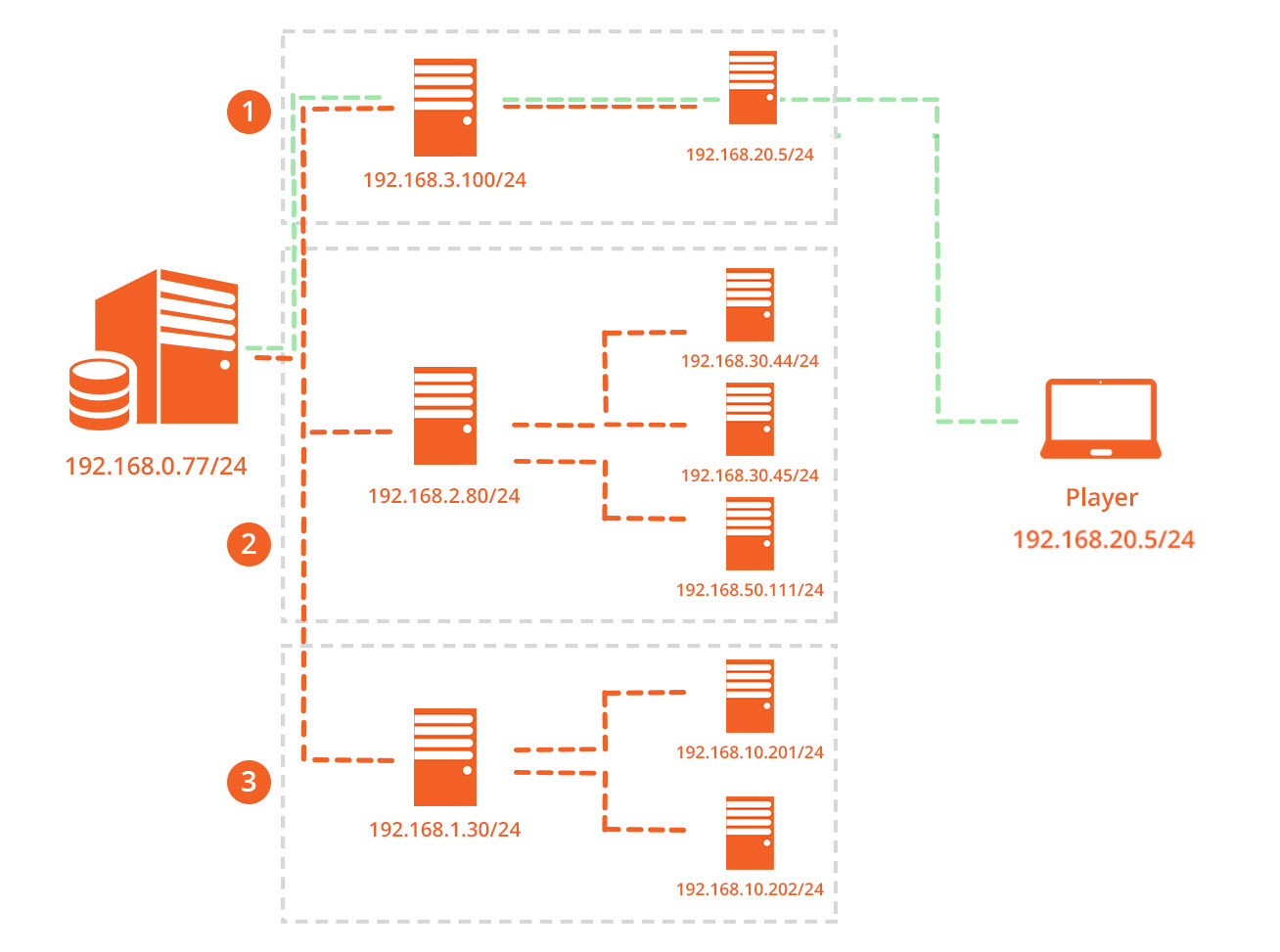 When looking for a stream, VIDIZMO player searches for nodes that are associated with the IP that is falling within the player's Subnet. The player intelligently selects the node based upon the IP Subnet that maps to the nearest node in the ECDN. If it does not find any such node, it traverses upwards to the node until that Subnet is found. In this way, the player relies upon the location hierarchy as it is the location that is the point of reference for the player to identify Subnets.

In the same way, the diagram above also shows how the Edge Nodes can be implemented in a hierarchy for the player to fall back upon if a local Edge Node is not found. The benefits of having multiple Edge Nodes on a location is that they can provide load balancing and the cater to multiple Subnets. In this scenario, the physical location remains the same and multiple Edge appliances are deployed.

In the example as shown in the diagram above, the Edge Servers are set up by three locations, having different Subnets, as well as on a node in a hierarchy: